This website or its third-party tools use cookies which are necessary to its functioning and required to improve your experience. By clicking the consent button, you agree to allow the site to use, collect and/or store cookies.
I accept
You are here: Home / Next Generation BC practice / Days of Future Past / Innovation, Transformation or Stagnation

I hope you had a chance to watch the Kanter video at the end of the previous post. I think it offers some useful insight into the issues I have been discussing in this series.

One of the main points in the video for me is when Kanter asks us to consider “what game are we in?”.

In order to change the game we first need to understand our current game. The “BC vs resilience” debate is a great example, they are not the same game, it is not innovation to simply adopt the name of another game.

Perhaps another reason we have struggled over the years to innovate the practice is explained in her comment that “innovation thrives on dissent”. Contemporary trends encourage people to be more ‘collegiate’. Which is often no more than a cultural control to discourage people from “rocking the boat”. And of course it takes less courage and intellectual effort to just go along with the status quo.

There used to be a saying in the IT game that “nobody ever got fired for buying IBM”. While the specific brand element is less true these days, the sentiment about prevailing orthodoxy remains.

And after all those years in BC many have risen to what Kanter refers to as “a position where they never have to learn anything again” – or at least nothing new and different!

This message of a need to change the game and innovate is evident in almost every article I have reviewed in this series.

Today Cyber threat is top of mind and #1 on the BCI’s Horizon Scan. Yet we still don’t seem to be keen on embracing Cudsworth’s call from 8 years ago to improve the ICT skills in the BC sphere.

I read about a lot of people advocating for innovation, but I don’t see much of it happening. I go back to where I started this series, the words of Gil Scott Heron;

“The first revolution is when you change your mind about how you look at things, and see there might be another way to look at it that you have not been shown.”

Is it that we have not been shown, or that we refuse to see?

What is it about the culture or mindset within the discipline that it is soo hard to change our minds? To see that there might be another way?

Can BC learn from Agile? 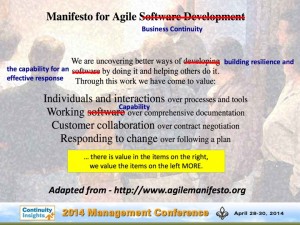 hen I first read David Lindstedt and Mark Armour’s Continuity 2.0 Manifesto (which morphed into Adaptive BC) I was excited that they had started with ideas from the Agile Manifesto.

In 2014 I presented at Continuity Insights Management Conference and at the Australasian BC Summit about introducing Agile Thinking into the BC practice – so my mind was already open to that option.

I also saw the bigger picture of their challenge to current practice in an Agile context – but the wider debate often seems to fixate only on the BIA aspects of their proposal.

Perhaps the unwillingness to change, the inertia of BC, is rooted in the tools, techniques and rituals of the past?

It is the difference between approaches. At the extreme points DOING means you have to follow the published process and turn parts of the discipline into rituals – to be religiously followed. BEING is perhaps more focussed on the result and being flexible about how you do that.

The choice of “Doing vs Being” is perhaps another way to look at Sinek’s ‘Why?’. The ‘How?’ of codified and religious observances compared with flexible and adaptive methods is the proof of what we believe.

You cannot innovate religion, that is a belief system and innovators in that space are called heretics.

I suspect our resistance to innovating is driven by the same core problem. BC is focussed on doing, based on long-held beliefs. One of my favourite quotes on this comes from the ResOrgs school;

We can see a similar understanding emerge even in the ISO domain, where the resilience standard moves away from certification, and the audit mentality and religious elements that often tend to follow the certification school.

These are two key concepts to understanding and use to achieve lasting change, but often they tend to be confused and even used inter-changeably. The result of that is the innovation doesn’t take root.

It is not enough to adopt resilience (or Agile) practices. Adoption relates to the DOING side of things. And while adopting new practices is essential to promote change and innovation – it actually isn’t enough to transform the discipline.

Charlie noted that we need a BIA because an auditor will ask for it. They only ask because one of those “shaping organisations” said they should. Transform that and then you will be free to adopt the BIA-less practices of Adaptive BC.

We need to both adopt and transform, and we need to be doing both in parallel. And perhaps incrementally and in the appropriate sequence.

As an example I argued in Putting Management into BCM (2012), that we need to start with transforming the core thinking that underpins current practice and make it relevant. The 30 year old rule that Lyndon wrote about, but didn’t make the connection.

In 2016 when I reflected on the previous 6 years experience I note that little has changed in practice.

We can individually adopt new practices and put pressure on the standards bodies and the institutes to transform to encourage and promote these – at the other extreme we transform the regulatory bodies first so they advocate that good practice is to adapt and adopt new techniques.

My guess is that nothing is changing because all these articles encouraged practitioners to adopt different ideas, but didn’t actually do anything to transform the rules.

Education month is coming up, perhaps this year we should dedicate it to educating the standards setters and the governing institutions.

In the interim, take about 70 seconds of your time and watch this video. It is a very famous TV commercial, about how thinking differently is an essential pre-condition to transforming the way things are done.