This website or its third-party tools use cookies which are necessary to its functioning and required to improve your experience. By clicking the consent button, you agree to allow the site to use, collect and/or store cookies.
I accept
You are here: Home / Archives for Risk Management 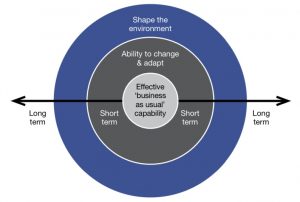 In the previous post I speculated on the lack of clarity about a “new normal” – even the name is wrong, perhaps we should be talking about our “next normal”. Do we want it to be the old normal – a concept of ‘bouncing back’ – or to take the opportunity to transform and ‘bounce […]

Last month the World Economic Forum issued its 10th annual Global Risks report. The report is free and you can download it here. I have always found these reports make interesting reading. What about you, have you read any of the earlier editions? In particular there are two aspects of these WEF reports that get my attention; […]

“In 1938, thousands of Americans confused a radio adaptation of the H.G. Wells novel The War of the Worlds with an official news broadcast and panicked, in the belief that the United States had been invaded by Martians. Is it possible that the Internet could be the source of a comparable wave of panic, but […]

2011 brought us more evidence that we cannot predict all our risks. If you don’t believe me, check out the risk registers of News of the World/News Corp, Tokyo Electric Power Co or Pennsylvania State University and you should find the proof. Hopefully during 2012 we will start to appreciate the need for the ‘art’ […]

I read an interesting piece of thought leadership today – Luc Klein’s paper that challenges us to think critically about what BCM should be, entitled “Is Business Continuity Management a misnomer?” If you haven’t heard about this paper you soon will, and you should click through and read it. The author argues that BCM as […]